The Potter & The Clay A True Live Story 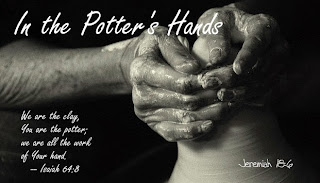 Today for my blog am sharing a personal testimony of someone I knew a LONG time ago for privacy sake we will call him M.B. every time I think of him I think of the Potter and The Clay just because truly God can shape us into something beautiful no matter how cracked and broken that we are.

M.B. and I had a wonderful talk he shared with me his daily struggles and how much he still struggles with his weakness. Although the road to redemption is difficult he still continues to walk the journey holding fast to the hem of the Lord's garments.

Growing up being exposed to verbal abuse it was a habit that he picked along his life journey growing up from one institution to the other and eventually graduating to HIGHER crime such as pimping, drug selling, and other serious crimes one on the outside of human power and strength would definitely condemn M.B. to wear the crown unable to be rehabilitation.

M.B. went on and on living the HIGH life never being broke without money to floss and living life as "The Untouchable". Most people say "I Found The Lord" however I always believe that it is rather the Lord that finds the individual.

Sometimes we run and run and run and in the end it takes just one seemingly non planned intervention to allow us to realize that no matter the fame or prestige that we may have as a mortal that it all means NOTHING without God in our hearts in our lives.

M.B. shared with me how in the middle of a serious party session that he encountered meeting a quiet man who did not say much however was not partaking in the drinking or the smoking.

This struck M.B. as odd and he was compelled to talk to this weird stranger who did not join in the festivities in just a minor conversation M.B. knew that this was just no ordinary guy. This non partaking stranger did not jump up and down shouting the great Revelation he simply left it all in God's able hands.

I always heard that the Lord says come as you are and M.B. is living proof that is so....true!! Despite M.B. history as a notorious gangsta and among other things M.B. heard God say in his heart "It's time."

Like the potter to clay his whole life transformed and not in a magical way like how a butterfly turns from a catepillar into a butterfly with sparkles all around he climbed hills and rocky mountains because the enemy knew that M.B. was a weapon and not a soldier in God's army.

Just remembering his story and testimony brings shivers up my spine M.B. is now working for the Lord he asked God to lead him to where he wanted him to be and has actually helped to lead alcoholics to the throne of God bringing them to church services.

I was rather touched by his testomony because truly God's chosen are often not found sitting in a University class or in executive positions with suits and ties on he calls those who are seemingly lost and hopeless.

I will share in M.B.'s own words the advise he gave to me quote on quote "Man I was a drug dealer my friends killed ppl I robbed ppl I was a pimp for 13 years and that's why I cry in church almost every service because I know what he did for me Don't listen to the devil he is a liar YOU ARE FORGIVEN."