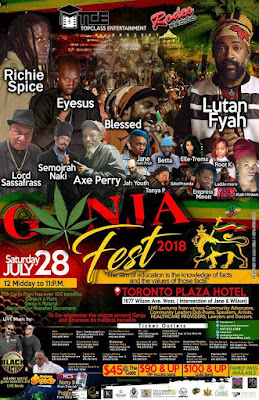 On April 20th, 2018 aka 4/20 Island Beats Dj Bubbles attended the Ganja Fest media launch at the Toronto Plaza Hotel. It was a lovely night with a combination of entertainment also enrichment of the mind.

Most people would affiliate ganja as a method to get high or even classify its plant as a narcotic however at the media launch it was very informative in terms of educating the minds on the health benefits of marijuana and its healing strength.

It was lovely to meet and greet Samantha one of the organizers of the upcoming festival on July 28th, 2018 which will feature Richie Spice, Lutan Fyah, Toronto's Blessed, Eyesus, and, more.

We heard the drummers perform a spiritual drumming session which featured Axe Perry which was an uplifting vibe.

Yami Bolo also attended as a special guest appearance and definitely set the mood off right it was a wonderful session. Semojah also performed acoustic style as well as Cora Reid, Elle Tremma, Eyesus also rendered a heavy performance it was a simple yet dynamic line up of entertainment to set off the vibe and prepare the massive for July 28th, 2018. 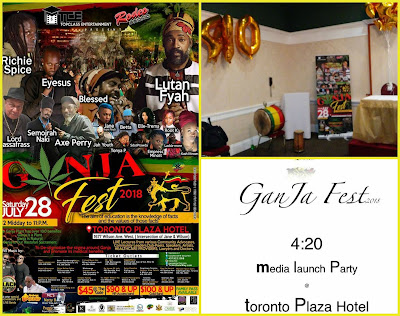 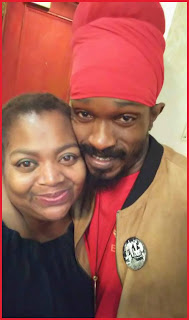 Island Beats is looking forward to attending the festival set to unleash its vibes on the city of Toronto on July 28th, 2018 at the Toronto Plaza Hotel.

Big ups to the organizers, the performers, for a wonderful initiative come out and support Toronto Island Beats will see you there.