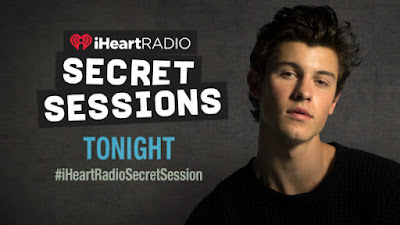 – Show airs live and commercial free, beginning at 8 p.m. ET –
TORONTO (June 18, 2018) – As singer-songwriter and international superstar Shawn Mendes gets set to take the stage at an undisclosed location tonight for his IHEARTRADIO SECRET SESSION, iHeartRadio Canada announced today that the concert is available to listeners of multiple Virgin Radio stations across Canada, CHUM FM in Toronto, and iHeartRadio.ca. The show airs commercial-free, beginning at 8 p.m. ET.
Performing for an exclusive group of iHeartRadio fans, the chart-topping superstar is set to perform brand-new music. As previously announced, former THE LAUNCH mentor and pop superstar Julia Michaels will join Mendes on stage for their duet “Like to Be You”.
“This is a once-in-a-lifetime experience for fans to get up-close to one of the biggest stars in the world, and we’re thrilled to be able to offer these exclusive opportunities with the IHEARTRADIO SECRET SESSIONS,” said Rob Farina, Head of Radio Content, Strategy, and iHeartRadio. “Now with a commercial-free simulcast, it allows us to connect this big-ticket event with fans across the country, and that’s what radio is all about.”
Here’s where the #iHeartRadioSecretSession with @ShawnMendes can be heard:
• IHeartRadio App
• IHeartRadio.ca
• Virgin Radio Toronto
• Virgin Radio Montreal
• Virgin Radio Calgary
• Virgin Radio London
• Virgin Radio Kitchener
• CHUM FM – Toronto
• Capital FM – Fredericton
Toronto born multi-platinum singer/songwriter Shawn Mendes released his highly anticipated self-titled third album in May 2018. The album debuted at #1 on the Billboard 200 album chart as well as multiple additional worldwide markets, including Australia, Canada, Mexico, Belgium, Holland & more. Shawn Mendes made Shawn the third youngest solo artist to ever have three #1 albums, and became one of the Top best selling album debuts of 2018. The album shot to #1 iTunes on release in over 80 countries around the world. Leading up to the album, he released multiple tracks including “Youth” Featuring Khalid, “In My Blood” and “Lost In Japan”. Both “In My Blood” and “Lost In Japan,” the first two songs released off the new album, experienced massive success, soaring to the #1 and #2 spots on the overall iTunes chart in the U.S., Top 5 on iTunes in 50 countries, and held the #1 and #2 spots on Spotify’s “New Music Friday” playlist. The tracks have received critical acclaim from everyone including Rolling Stone, Billboard, Idolator, Variety and Paste.“In My Blood” is currently Top 10 at Pop Radio and Top 20 on the Billboard Hot 100. In April 2017, Shawn released his 3x Platinum hit “There’s Nothing Holdin’ Me Back.” The track scored Shawn his second #1 single at Top 40 radio and on Billboard’s Pop Songs chart, joining 7x Platinum single “Stitches.” With “There’s Nothing Holdin’ Me Back,” Shawn also became the first artist to ever have had three #1 singles at AC radio before the age of 20. Throughout his career, Shawn has achieved 2 #1 album debuts with Handwritten (2015) and Illuminate (2016), two Platinum albums, and seven consecutive Platinum and multi-Platinum singles. Worldwide, he has sold over 10 million albums, 100 million singles, and has amassed over 11 billion song streams and 4 billion YouTube views. Shawn has completed two sold-out world tours with over one million tickets sold, selling out legendary arenas including NYC’s Madison Square Garden, Toronto’s Air Canada Centre, and London’s O2 Arena in minutes. He topped Billboard’s “21 Under 21” in 2017 and has been featured on Forbes “30 Under 30,” Spotify’s “25 Under 25,” and Time Magazine’s “Most Influential Teens” for 4 consecutive years. He was also just featured in Time Magazine’s coveted Time 100 annual issue. In February 2018, ROI Influencer Media recognized Shawn as the #1 Most Influential Artist and #1 Most Influential Teen across all social media platforms.
SOCIAL MEDIA LINKS:
Twitter: #iHeartRadioSecretSession@BellMediaPR
@iHeartRadioCA
@ShawnMendes