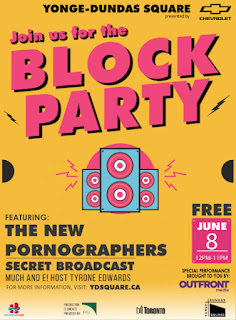 Island Beats had an amazing experience attending the 15th annual block party in Toronto at Dundas Square on June 8, 2018.

There was so many activities and entertainment it was unbeleivable.

One of the breath taking experiences was watching the holigram it was like real live acts from major artists such as Billy Holiday, Jackie Wilson, The Jackson 5 and many more legends in the music industry.

We also took in Canada's First VIrtual Augmented Reality Games it was neat to see people playing the game with such vigor with the special eye wear.

As well the Chevrolet car that was on display in the middle of the square that was decorated with spray paint by the artists themselves who performed.

Speaking of performances we watched Featurette add a few more degrees to the weather with their amazing performance which really engaged the crowd in the downtown core where the square is located.

Secret Broadcast which was composed of various instruments and their lead vocalist Matt was also ear candy as well they performed hit after breath taking hit.

Island Beats also met and had a little chat with Tyrone Edwards of Much Music the host of E! News who shared with us his passion for the strong multiculturalism in Toronto and his passion for diversity as well. Tyrone shared that he started off from the beautiful island of Jamaica and that now his home is Toronto and with his career it gives him opportunity to travel very much. Tyrone was also the host of the block party as well.

We were able to interview the general manager of Dundas Square Mr. Taylor Raths whose passion and committment to increase inclusion in the community was second to none.

Taylor relayed to us during our interview that he works hard to make sure that the volume of diversity, multi culture, and unity remains the foundation of the Dundas Square which is located right in the middle of Yonge and Dundas across from the world known Eaton Center.

Out Front Media also put on the secret holligram performance towards the ending of the block party as well.

Mr Rath shared the many events and different cultural events that has been hosted inside the square such as Destination Thailand, The Mexican Festival in 2017, various Aboriginal Festivals, The Pride Festival who also uses the Dundas Square as their primary stage, in addition to the Multicultural Canada Day festival where the community folk arts council is invited to attend as well.

We asked Taylor if he could remember the major milestones pertaining to performances that have taken place inside the square and he smiled as he remembered when Best Buy opened its doors and Beyonce played a free concert at the square which he describes that there were so many people who attended that concert patrons were outside in the streets to take it in.

The Dundas Square is a facility where events can be held especially during the summer months as its designed to host events with the stage and the space at the square which is conveniently located right in the middle of downtown in the Yonge area and easily accessible.

The great aspect about the square is that any one who choses the square as their venue to showcase an event is offered affordable rates and also to non profit organizations that may not have the financial resources to pay high costs to use outdoor spaces.

Taylor informed me that they have incorporated a new process for those who are wanting to facilitate and event at the square. The process is that the organization or individuals would need to submit a proposal outlining exactly what they want to do and the outcome and then the team at the square goes the extra mile to work actively with them to see their event idea manifest.

Another unique component to the Dundas Square is that they live up to their promise in the community to have all events end at 11 PM so as not to disturb residents in the high rises in the surrounding area's disturbed by noise or loud music.

It was a great experience to get to know more about land marks in our downtown community and also learn about the history and back ground of Dundas Square.

Every word of their committment to enforce diversity and inclusion was see in the atmosphere at the square's block party yesterday.

Island Beats is looking forward to attending next year to be a part of the diverse movement and suggests that next year Toronto come out and be a part of the Dundas Square contribution to our community to build stronger and more unified communities.