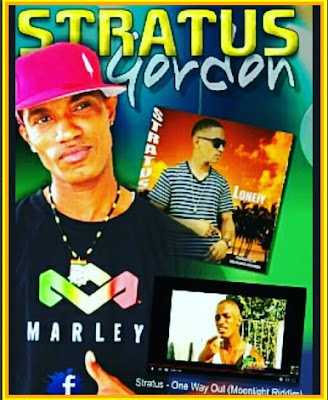 Island Beats truly enjoyed reasoning with Jamaica's uprising reggae artist Stratus Gordon who took us down memory lane to tell us how he embarked on his journey as a lovers rock style reggae artist.

Gordon was heavily influenced because he simply had a deep passion and love for music which has grown stronger through out the years.

Stratus Gordon has been busy with his career and and has recorded many tracks however he is yet to produce an album however producing an album is something that he is working towards accomplishing in the near future.

We asked Stratus to tell us about his major milestone's in which he informed us that his greatest memory in the industry was being called to the stage by the infamous Professor Nuts at a reggae show called Ram Jam in Claremont Jamaica.

Currently Stratus is working on some more tracks to enlighten his fans called If You Were My Girl, Scrap and Crawl, and, Wish You Were My Girl which will feature African artist Buzzy Papo.

Stratus is working hard to achieve his vision of singing great songs and writing songs that will live on in the hearts of the people.

Stratus Gordon enlightened us by telling us that he is motivated simply by singing music which is his God given purpose and he also advised to the young and upcoming artist's to continue to write great music and added music that is clean enough to be played in any atmosphere.

As well Stratus advised that before taking up the endeavor to becoming an artist that it is imperative to first love the music and also to learn one's craft and to remain as focused and humbled as possible.

Stratus Gordon is not only a gifted artist however he is a very kind and selfless person as an individual who is always willing to share the works of others along the way.

It was a pleasure to speak with Stratus Gordon and Island Beats is wishing him nothing but the best with his musical journeys.