Island Beats At The 2018 Much Music Video Awards In Toronto

Island Beats Magazine had the honor to cover the iHeart Radio MMVA (Much Music Video Awards) for 2018 in Toronto.

From the first point of contact with Bell Media there was an aura of professionalism and friendliness and also prompt and great communication.

As soon as DJ Bubbles of Island Beats hit Queen Street West you can see the hustle and the bustle as fans lined up to take in their favorite Canadian stars such as Shawn Mendes, Alessia Cara, Marshmallow, and more.

As we approached the venue everyone was busy preparing the red carpet as performers began to arrive.

After receiving our media passes the media personnel proceeded to the media room that was set up very nicely and it was easy to get comfortable and wait for the activities to begin.

There was a snack bar that consisted of peanuts, chips, hot pretzels, soft drinks, and, bottled water as well as a buffet prepared with wine as well to serve to the media attendee's.

Yates also revealed the importance of taking care of physical and mental health to be able to be productive which for him was a catalyst to being signed to a major record label at the young age of 16.

Franceso was also asked how he would describe his style of fashion which he described as post modern and street glam.

Francesco Yates stated that he does not isolate himself intentionally however he does spend a great deal more of his time at home because he now has his studio set up within his house.

Francesco let us know that he uses his leverage in the music industry to inspire others to do good and also uses his influence through the stage metaphorically speaking to point people in the right direction.

Elijah Woods & Jamie Fine were a jovial and engaging two during the press conference at the MMVA 2018. They entered the room with a sense of openess and a welcoming vibration.

Jamie explained that their music career began when they were in school while she was in the culinary program and Elijah was in the music program she was one day singing and unknown to her their current guitarist recorded her with out her knowledge and that was the genesis of two of the most loved Canadian artists in the industry today.

The two spoke about the reason why their current hit track "It Ain't Easy" was released with different lyrics that what was originally intended.

Jamie and Elijah explained that after a musical brainstorm they decided that they did not want to sing a song about being hard to love so the original lyrics were changed.

As the two spoke passionately about the fact that modern music is often stripped of emotions and they wanted to sing songs that invoked emotions into their listeners and to also use their leverage in the music industry to bridge that gap between meaningful music with feeling and music that did not have feeling.

Jamie and Elijah did reveal that they were being patient and slowly working on releasing an album and also advised that their song "It Ain't Easy" which they performed on the red carpet was about to be released in the USA. 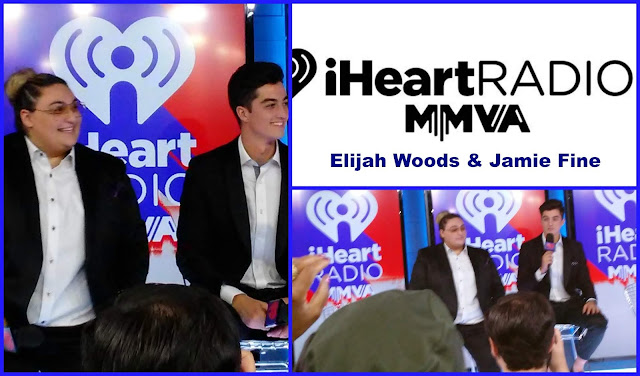 New York born Bebe Rexha spoke to us and divulged the story on how she came about recording her hit single with Florida Georgia Line "Meant To Be."

Bebe shared that she had received a call from her manager alerting her that Florida Georgia Line was at a studio minutes away from her home and she reluctantly attended the studio with the intent of having a turkey burger.

She now says that it was a good idea to go because herself and Florida wrote Meant To  Be within 4 hours surprisingly.

At this point Bebe realized that she could sing in any genre and added that her new album called "Expectation" was a result of her inspiration of all that things that she had been through.

Rexha revealed that she worked with Eminem and G-Easy and told the press conference that she does have a particular liking for country songs due to their simplicity and the fact that country songs contain lyrics that tell a story.

BC born and raised Tyler Shaw looked dazzling dressed in his orange suit definitely an eye catcher and trend setting outfit he was as well a joy to hear from at the MMVA press conference on August 26, 2018.

Tyler remembers always wanting to be a part of the Much Music Awards and was happy to share that this year was his 5th appearance at the awards show.

Growing up in Canada Tyler grew up in western Canada however went to school in the east in Prince Edward Island.

Tyler was very proud to be part of the wave of Canadian artists who have helped to put Canada on the map and on a global scale musically speaking.

Shaw described Toronto as being equal to large city's such as Los Angeles and beamed at how proud he was to be a part of that movement.

Tyler also says that the other artists moving into the international platform as well should take a bow as well.

Tyler's performance of his track "With You" was definitely a sensation for his fans on the red carpet.

Evan Ross & Ashlee Simpson entered into the press conference hand in hand as a loving husband and wife.

Evan shared that it was his birthday with a bright smile and friendly demeanor.

The two mentioned that they were having a wonderful time in Toronto and spoke of their scheduled to be aired show on September 9, 2018 called the Ashlee & Evan show.

Ashlee and Evan told the press room that the basis of the show was to convey that being in love was not a bad thing and also shared how happy they were to be working together which has not been the case with Evan being away in Atlanta 6 months out of the year to shoot the Netflix series Star and Ashlee being at home with the children.

Although Ashlee has taken a break from the screen and stage she shared that the show would focus on their life together and that though there were going to be differences from the Ashlee Simpson show that the friends that appeared on her previous reality TV show would also appear on the Ashlee & Evan show as well.

The two were clearly happy and looking forward to their show together and stated that the show was a mutual endeavor and Evan personally shared that the Ashlee & Evan show would be their opportunity to increase light and positivity to the world.

Both Evan & Ashlee were overjoyed at the fact that working together on their upcoming show provided an opportunity for the children, and the couple to spend more time together.

The group New City described 2018 being a year of dreams for them as they have been signed to a major record label and also the fact that they were also part of the wave of Canadian talent that is now on a global scale so to speak.

The group shared that they grew up listening to the radio and referred to the fact that they were now on the stage also as a dream.

They also provided the concept of remix as allowing other artist to do over their song ultimately having the song reaching different people when remixed.

As well New City told us that their song 'Getting Closer" was written in their downtown Toronto condo.