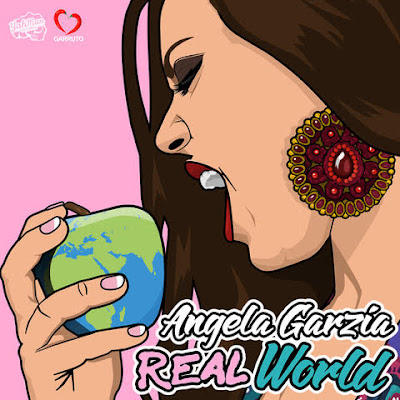 New collaboration of Angela Garzia with Morello Selecta and Robi Garruto.
After the success on Rai 2 at 90 minuto with "It's time to Live Remix" and after reached
the 18th position in the Italian and European iTunes charts, the label from Salento Yah Man Records
proposes the new song "Real World", a musical journey, dominated by tropical atmospheres,
whose goal is to make Who listen discover a real world, far from the superficial, that should be lived with new eyes.

The song is accompanied by a videoclip shot in the suburbs of the province of Matera (South Italy),
in a popular district typical of the southern cities, actors and figures have been involved
who live daily the suburbs and the harsh reality that the authors wanted to represent.
Digital Leukos and its executive producer, Renato Armignacco, wanted to immoralise
the suburban reality that characterizes the territory, creating atmospheres in which
the young people of the outskirts of our South can recognize each other.
The protagonists of the video clip, Gaia Giovinazzo and Adriano Laviola, offer a convincing and realistic interpretation.
The Director, Vincenzo D'Onofrio, has managed to combine this mood, very often without prospects
and possibilities, with a positive final message for those who live in those places:
the possibility of redemption. An original and modern set, inspired by contemporary photographers
of fame and framing designed as a plastic framework.
Everything has been mixed and designed by the Director of Photography, Federico Giannace,
who creates a photograph with a modern taste, combining wide-angle shots
on the outside and creative use of the lights inside.