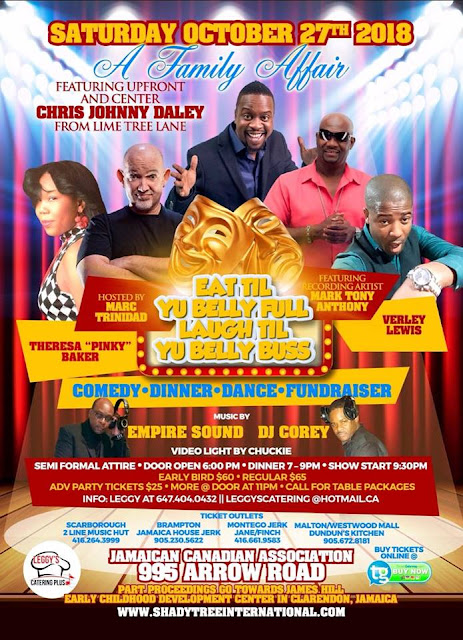 Island Beats found it such an inspiration to speak with Leggy's the master chef of Leggy's Catering Plus who is the organizer of the "Eat Till Yuh Bell Full Laugh Till Yuh Belly Buss" event in Toronto for quite some time.

The event is a presentation of an infusion of a scrumptious dinner, live comedy, dance, and is also a fund raiser to assist the children in Jamaica with the costs involved with going to school.

This year on October 27, 2018 inside the Jamaican Canadian Association Center kicking off at 6 PM brace yourself for a night of comedy with Christopher "Johnny" Daley from the movie Passa Passa, hosted by Marc Trinidad, Theresa "Pinky" Baker, music performances from Toronto's Tony Anthony, and music selections from DJ Cory.

Leggy's provided us with some background history of the event which started in 2011 and
although initially Leggy began with two events in the end he found the most success in hosting the "Eat Till Yu Belly Full Laugh Till Yuh Belly Buss" so he put his heart into the event.

The event "Eat Till Yuh Belly Full Laugh Till Yuh Belly Buss" was more than just a show to generate income for Leggy it was a chance for him to do what he loves to do best which is cooking mouth watering meals and also an opportunity for him to give back to his community in Jamaica.

Leggy shared that his mother passed away at an early age which caused him to have to mature at a young age and fend for himself on many occasions in terms of paying school fees, having his lunch money which can be difficult in Jamaica.

Leggy explained that later on in his younger days that his grandmother taught the parable of the 'Shady Tree." The Shady Tree was the act of his grandmother taking the little that she would earn from the compensation she received from those same resented guests and hiding it under her mattress to provide a future to her grandchildren.

It was actually his grandmother's Shady Tree concept that later on in his life inspired him to use a portion of the proceeds from "Eat Till Yu Belly Full Laugh Till Yu Belly Buss" and donate to various school in Jamaica for students who were struggling with paying for their education with the desire to learn and increase their education. 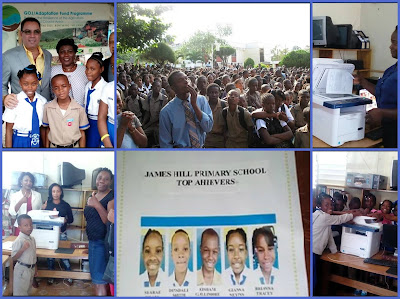 Leggy actually named his non profit organization "Shady Tree" as a way to honor his grandmother for teaching him the meaning of giving and doing without at times to help others.

On October 27, 2018 we urge you to come out and have a great time, eat great food, enjoy great music and live entertainment to be able to plant your own shady tree. A portion of the proceeds from the event will give opportunity to students in Jamaica to achieve their dreams and aspirations and in particular those whose only barrier is financial hindrances.

The event will be taking place at the Jamaican Canadian Association located at 995 Arrow Road Toronto, Ontario M9M-2Z5.

For more information regarding this spectacular upcoming event on the 27th of October, 2018 please call (647) 404-0432 tickets can be purchased in advance at: